We begin the description of this stage at the Igreja de S. Pedro de Rates / Church of S. Pedro de Rates (map and altitude profile at the end of this publication) at 17.2 km to Albergue Cidade de Barcelos. São Pedro de Rates was the first bishop of Braga, and would have been ordained by the apostle Santiago himself, coming from the Holy Land. Santiago, one of the apostles of Christ, had visited the northwest of the Iberian Peninsula in 44 AC. During his visit, the apostle ordained Saint Peter (São Pedro) of Rates as bishop. The Museum Center of the Romanesque Church of S. Pedro de Rates is one of the obligatory passages of the Portuguese Way towards Santiago de Compostela (Caminho Português de Santiago) and deserves a leisurely and attentive visit! 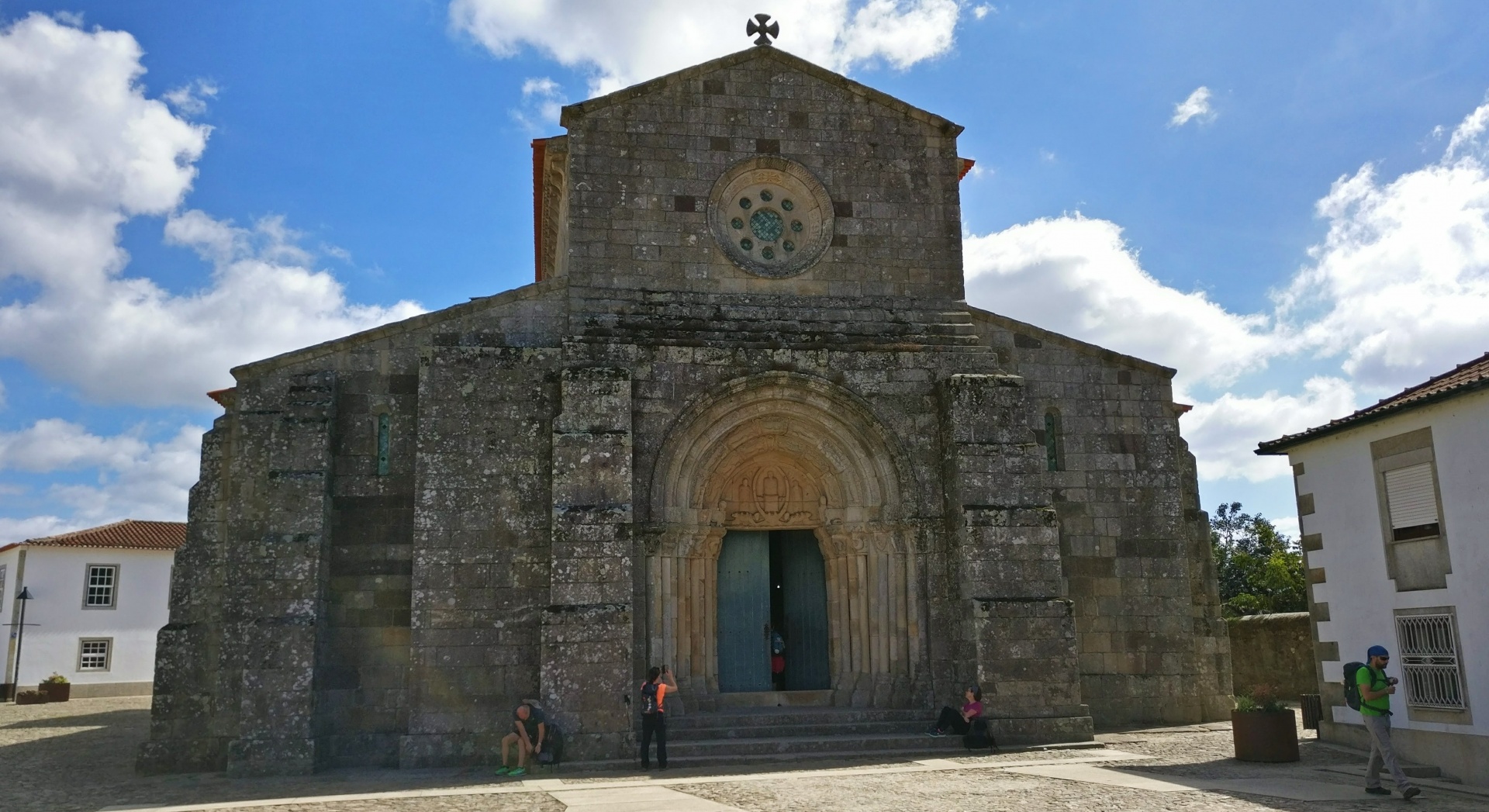 After walking the first few hundred meters, on the left, the Pilgrim's Albergue of S. Pedro de Rates appears. This Albergue de Peregrinos was the first Albergue on the Caminho Português de Santiago (in the "modern" era). 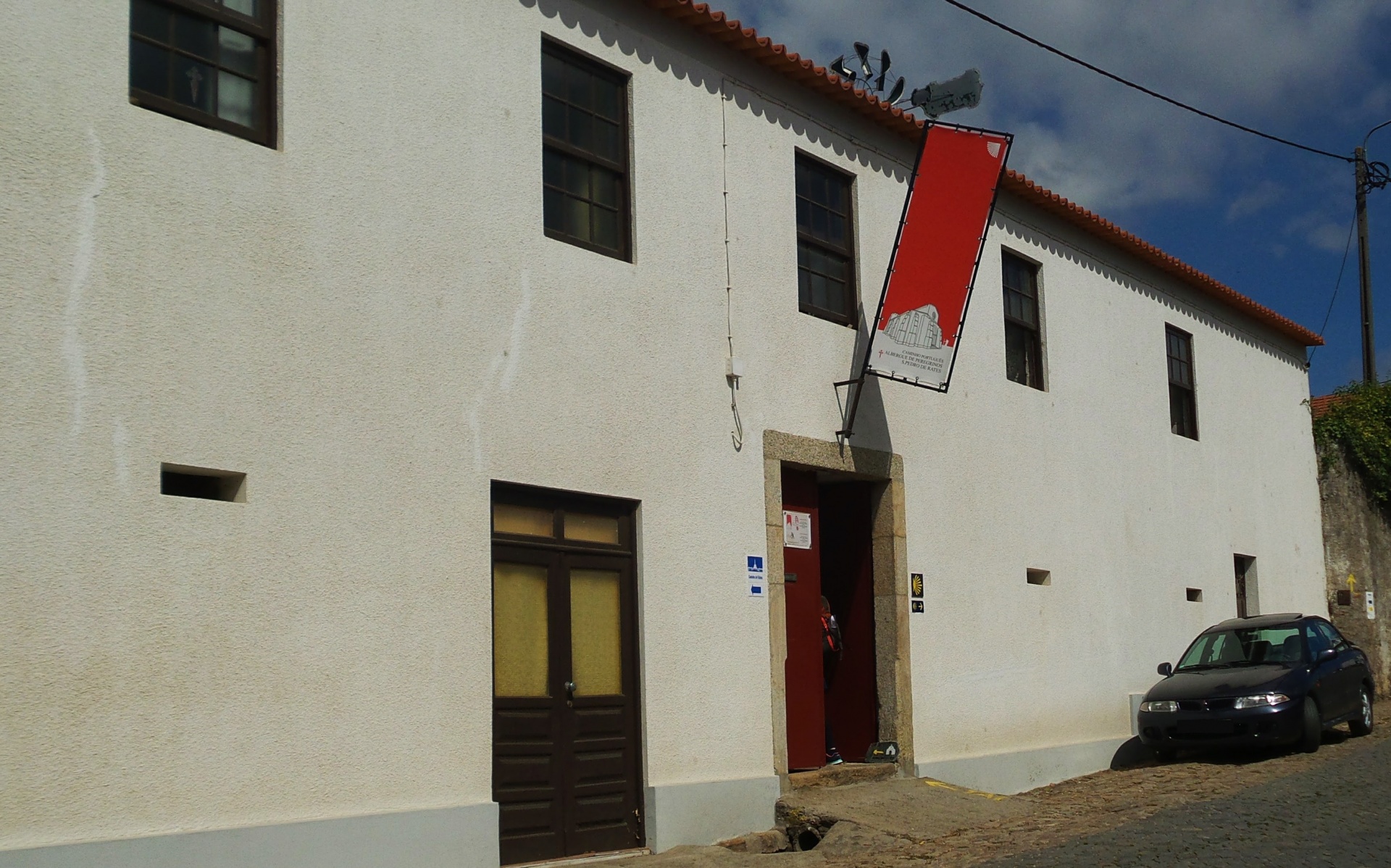 Leave the Albergue de Peregrinos of S. Pedro de Rates behind and follow Rua de Santo António and Rua da Ponte do Burrinho. On a dirt road, flanked by old stone walls, those who travel along the Caminho Português de Santiago enter the municipality of Barcelos through the parish of Macieira de Rates and travel through the "Alto da Mulher Morta" (few who pass there know that this place is associated with a legend: the "Legend of the Dead Woman"). You are at 209 km to Santiago de Compostela. 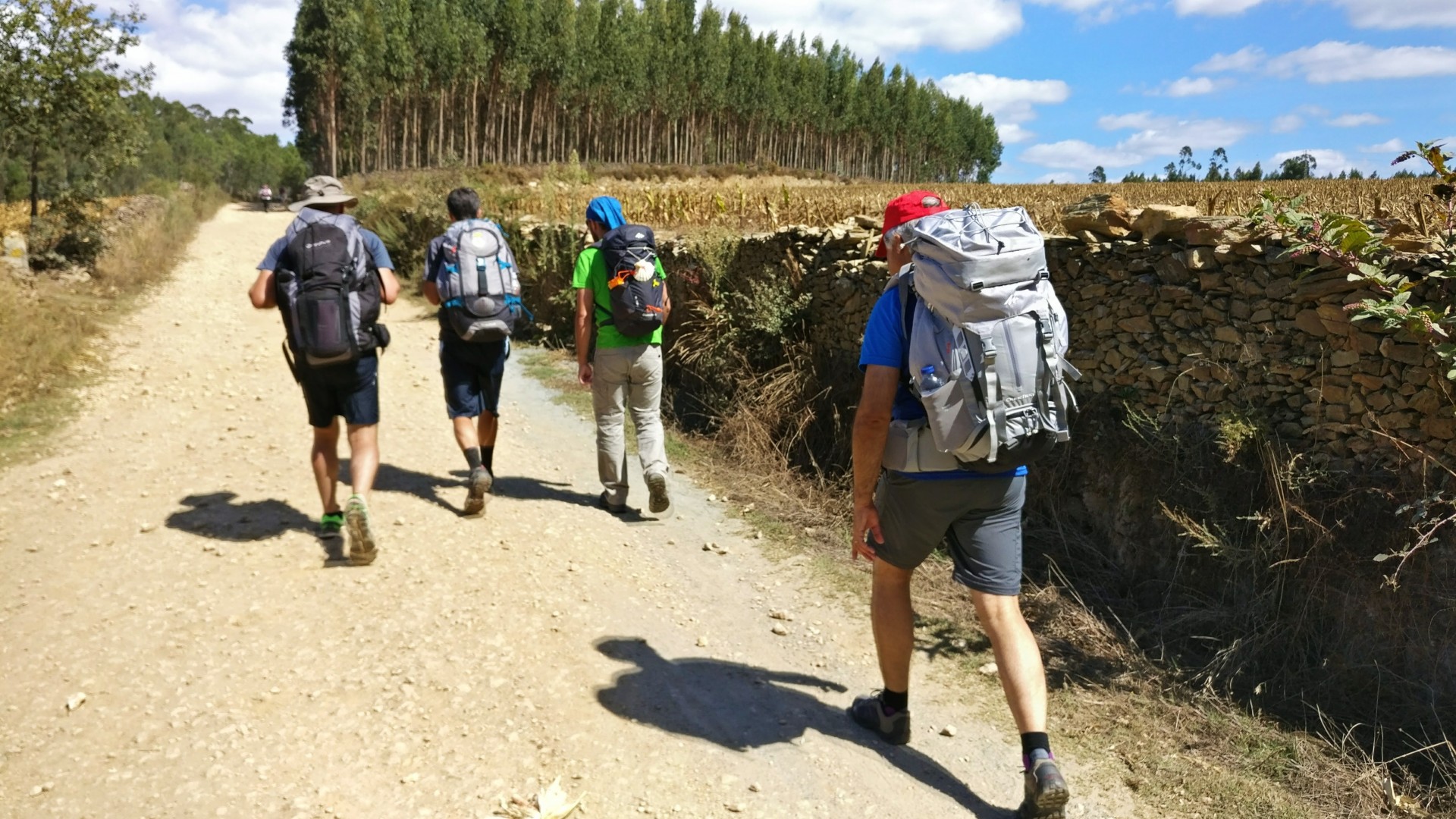 After passing through Alto da Mulher Morta, we leave Macieira de Rates. Following a dirt road, quickly reaching the parish of Courel: the first housing unit in the municipality of Barcelos, where, on the right, the Casa do Aguadeiro do Caminho is located: Mr. Messias. You are at 208 km to Santiago de Compostela. 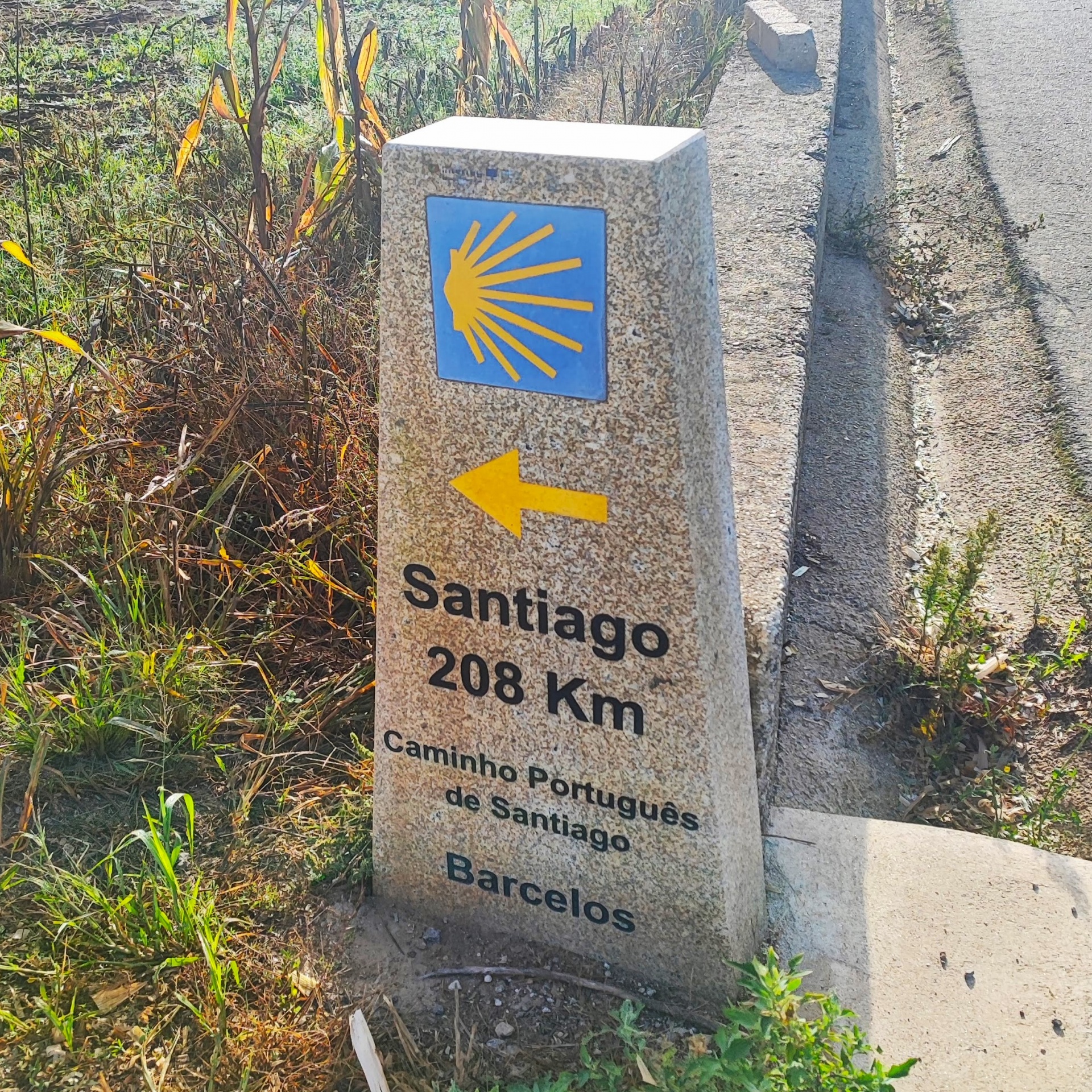 Continue along a dirt road until reaching Rua Central and, after a detour to the right, take the EN306. Entry and the circulation on the EN306 deserves the best and greatest attention from pilgrims, due to the danger of circulation together with road traffic. A few meters after entering the EN306, on the right, the Igreja de Pedra Furada appears, where, in its vicinity, the "pedra furada" (and its legend) is located. 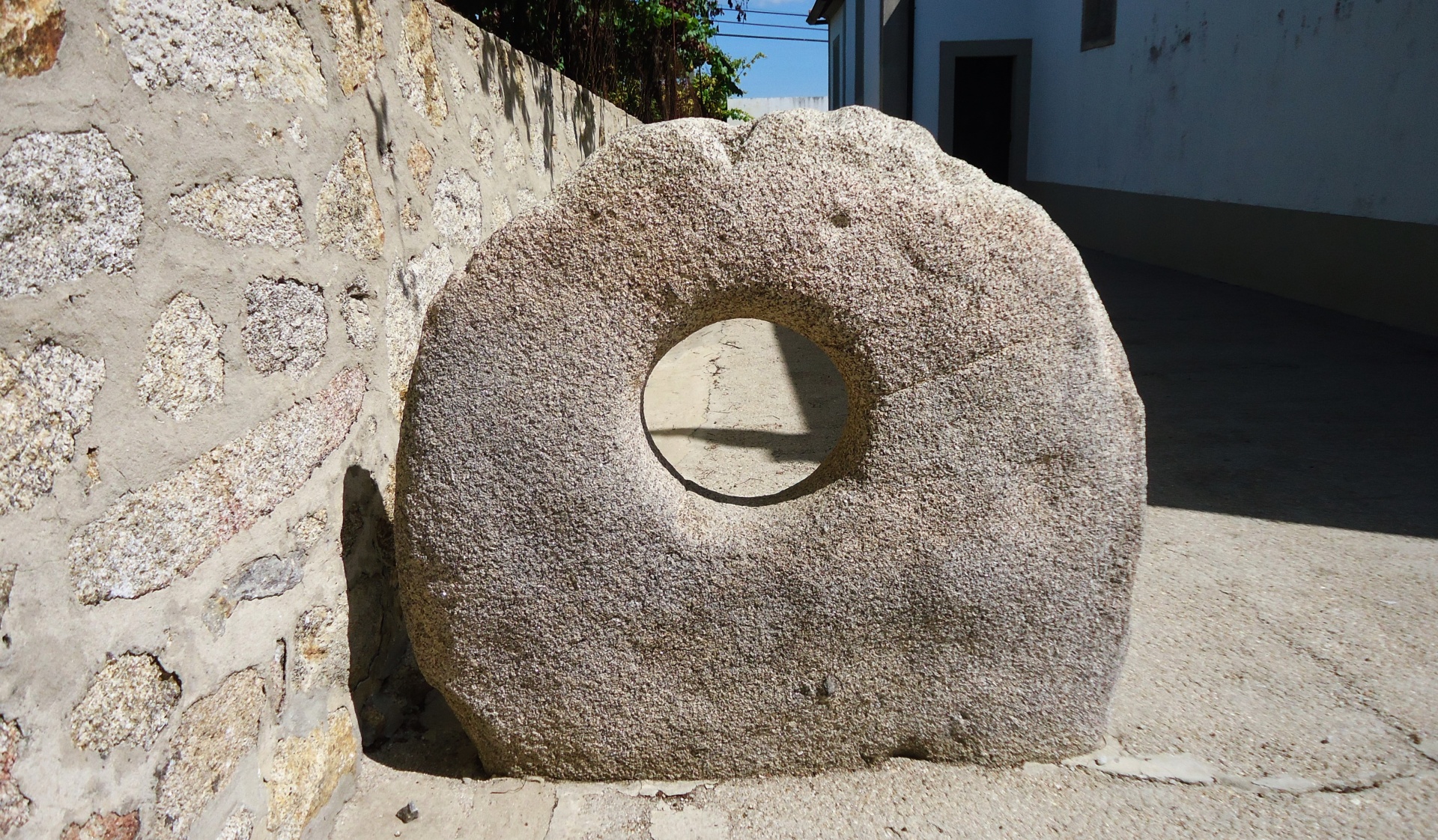 Continue going up the EN306 until you turn left towards Travessa de Santiago, immediately before Pedra Furada Restaurant.

[8.26 km] - Crossing where the Franqueira Variant begins, on the left

At the end of the climb, you have two options: go straight ahead, along the main route, or turn left, opting for the Variante da Franqueira. 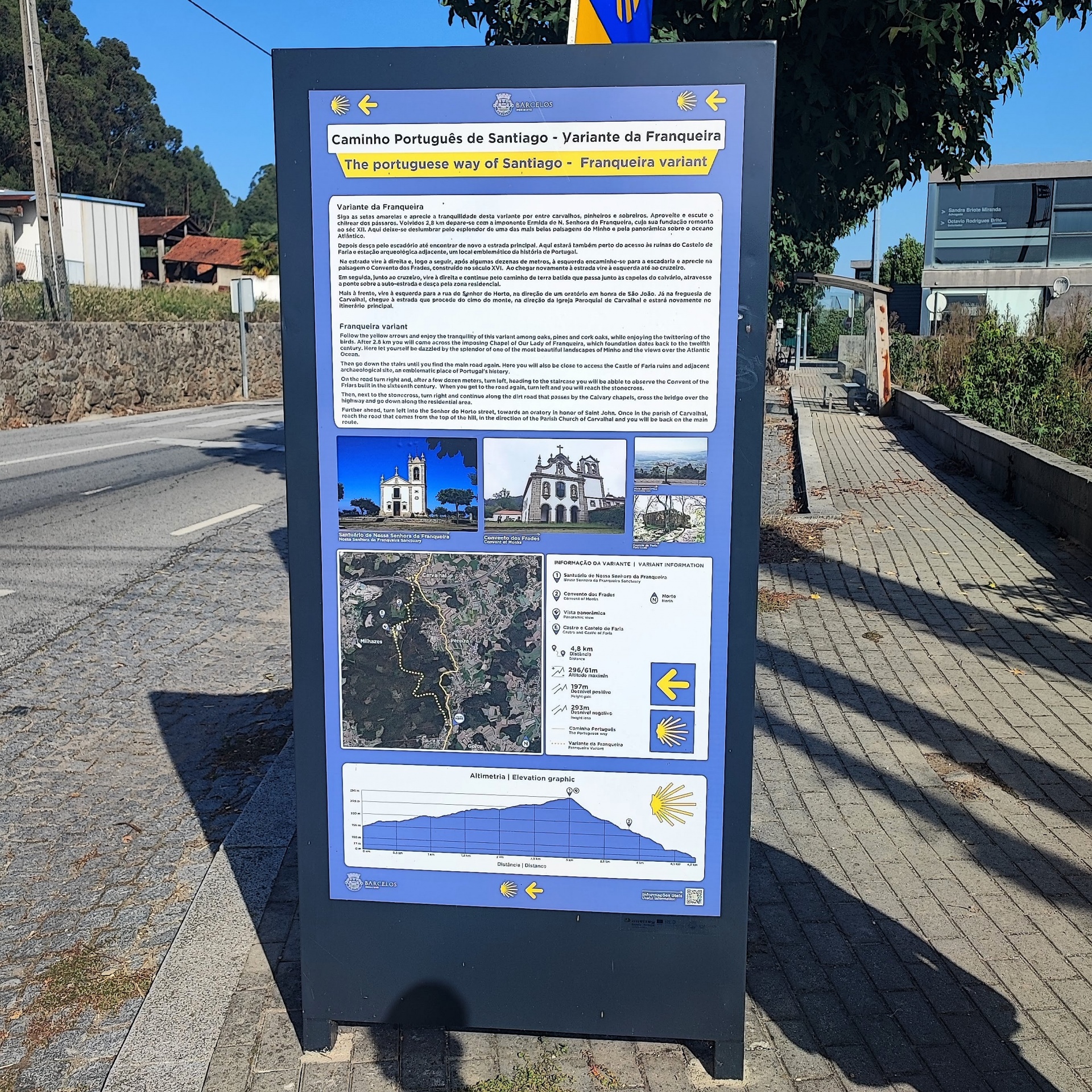 Moving forward, along the main route, in a few meters you will reach the Chapel of Nossa Senhora da Guia, on the left. 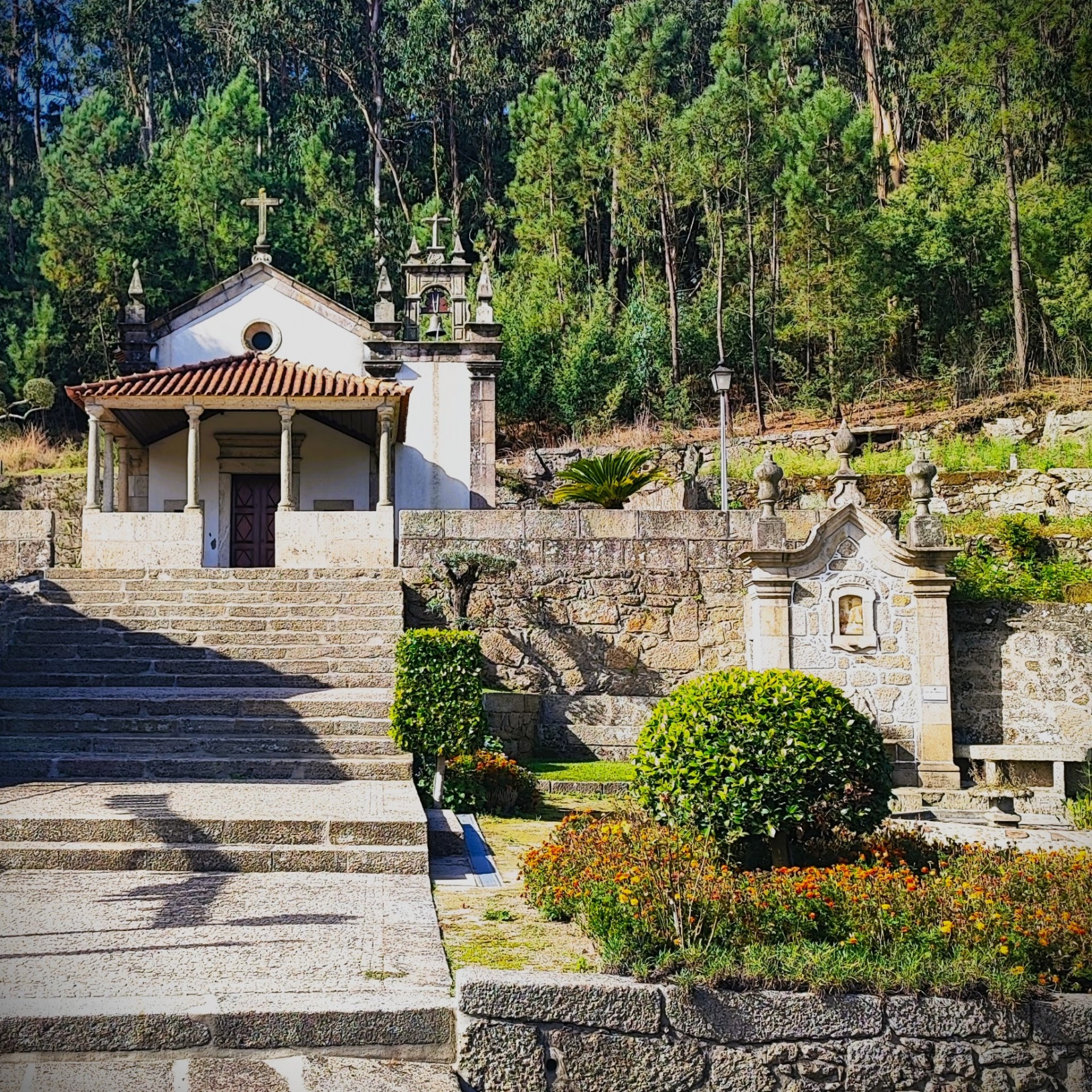 In order to avoid the danger inherent to car traffic on the EN306, it is suggested that you take a trail through the trees, turning left. 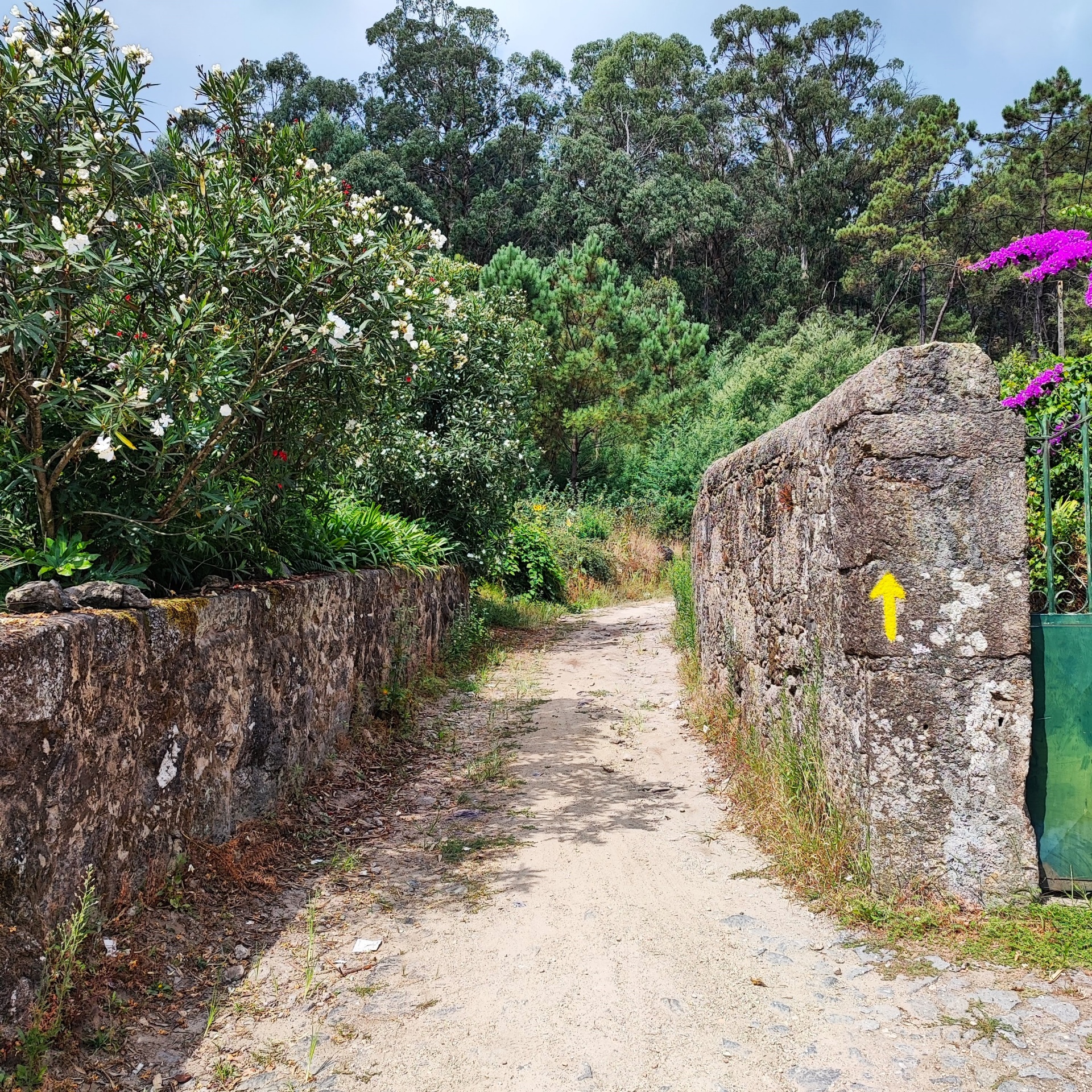 After retaking the EN306 again, turn left again towards the center of the parish of Pereira. You are at 202 km to Santiago de Compostela. NOTE: several Pilgrims choose to go straight ahead, along the EN306, probably with the expectation that this will be a shorter alternative to the city of Barcelos. However, this section of the EN306 does not have sidewalks for safe pedestrian circulation along the entire route; in addition, it is the scene of significant car traffic. We consider that the option of following the EN306, leaving the Caminho Português de Santiago, although representing a shorter distance, becomes more dangerous and tiring. Always follow the route of the Caminho Português de Santiago that is signposted!

Arriving at the Church of Carvalhal, turn left, and continue along Rua João Francisco Santos and the old Estrada Real that leads to Rua de Mereces and Barcelinhos. You can also take the opportunity to take a break at the "Banco Peregrino". You are at 199 km to Santiago de Compostela. NOTE: also at this point, some Pilgrims choose to go ahead, with the idea of ​​taking a shorter route. Always choose the signposted route of the Caminho Português de Santiago! From popular wisdom, we know that "whoever takes shortcuts, doesn't get rid of work" :-) 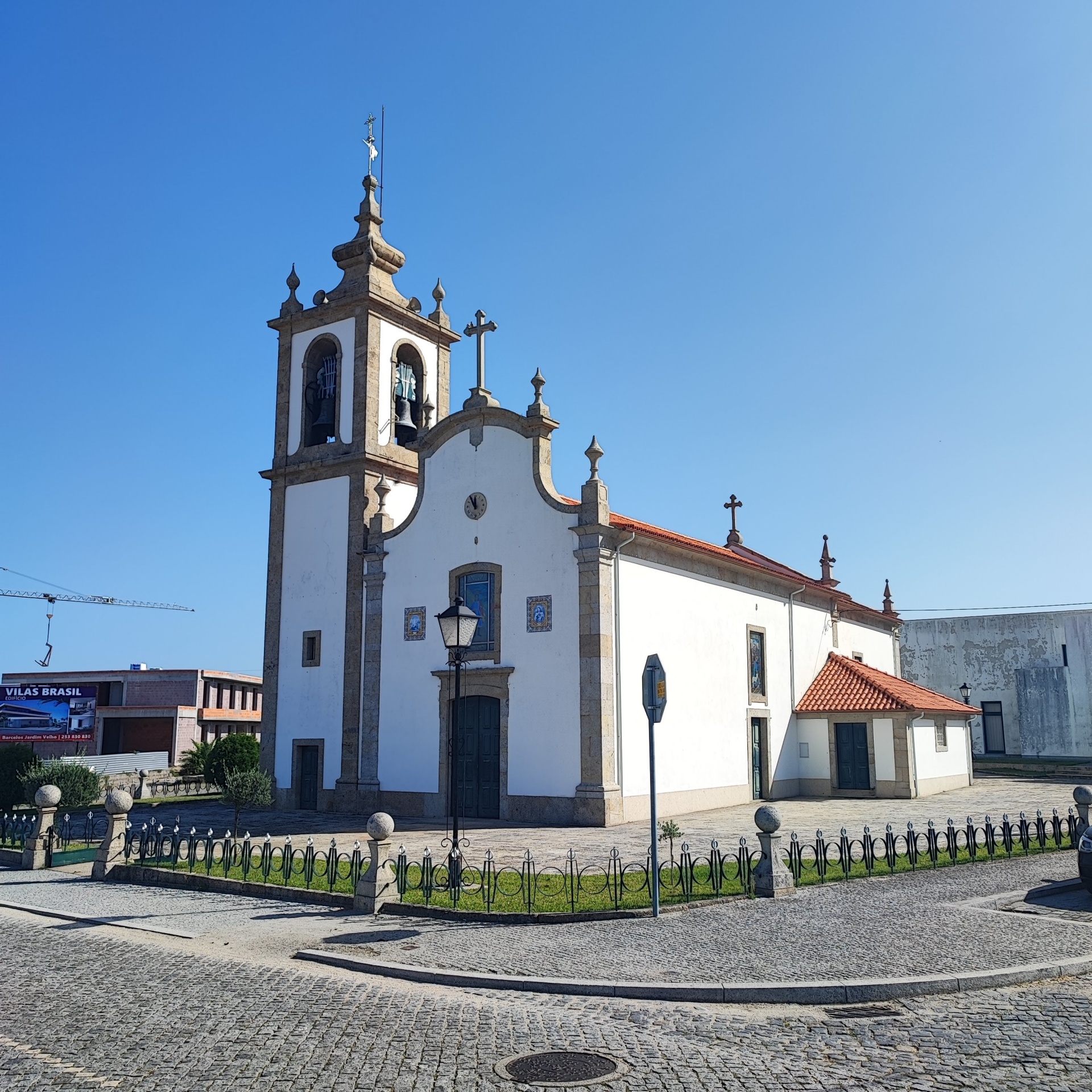 At the end of the parish of Carvalhal and the beginning of the parish of Barcelinhos, you will find the Chapel of Santa Cruz das Coutadas where, on February 13, 1861, a cross appeared on the floor. You are at 198 km to Santiago de Compostela. 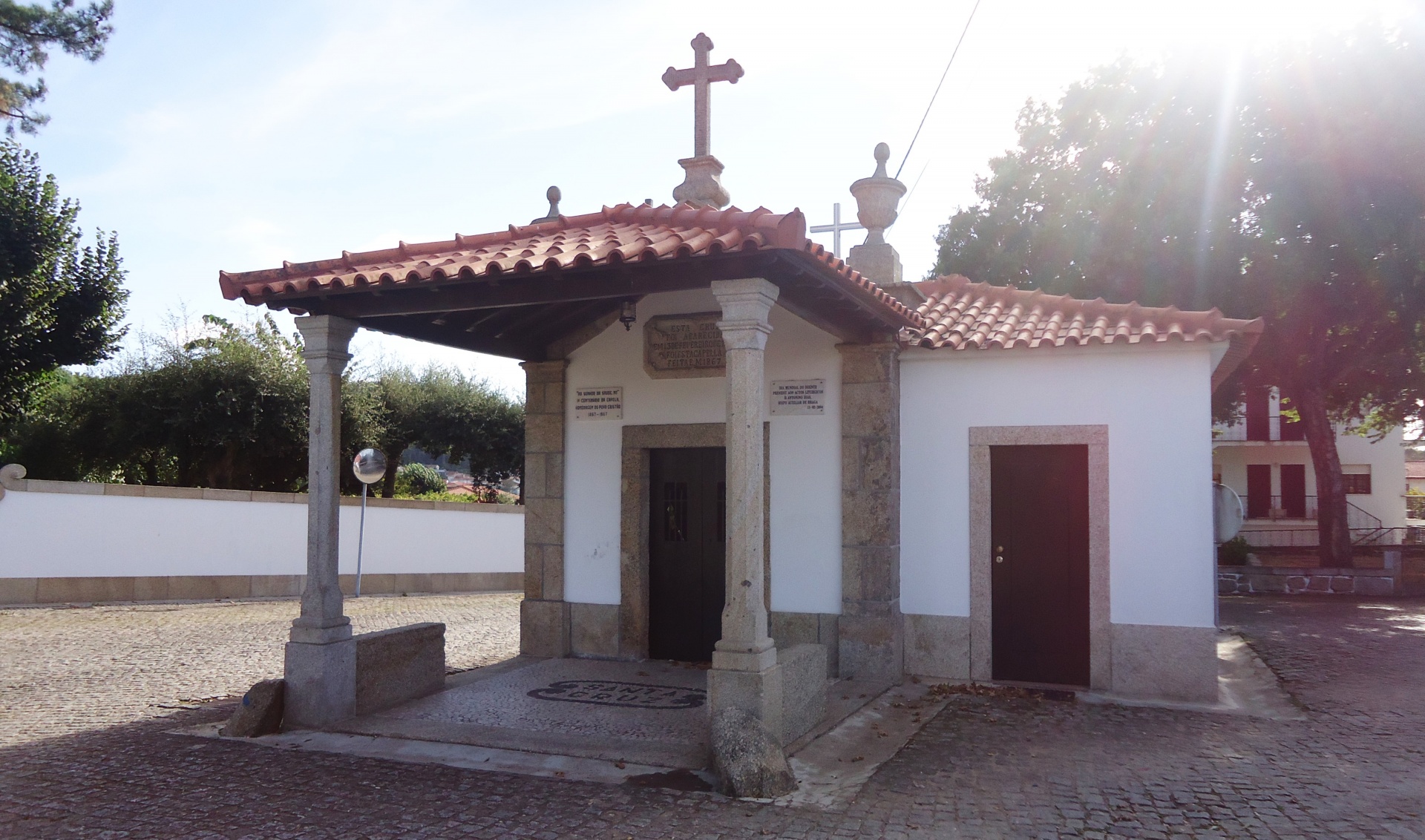 Six hundred meters after passing the Chapel of Santa Cruz das Coutadas, you reach the roundabout located at the end of Avenida de S. João, in Barcelinhos, "stage" of the "Galo Peregrino" (a piece by the Barcelos artisan Adriano Faria). 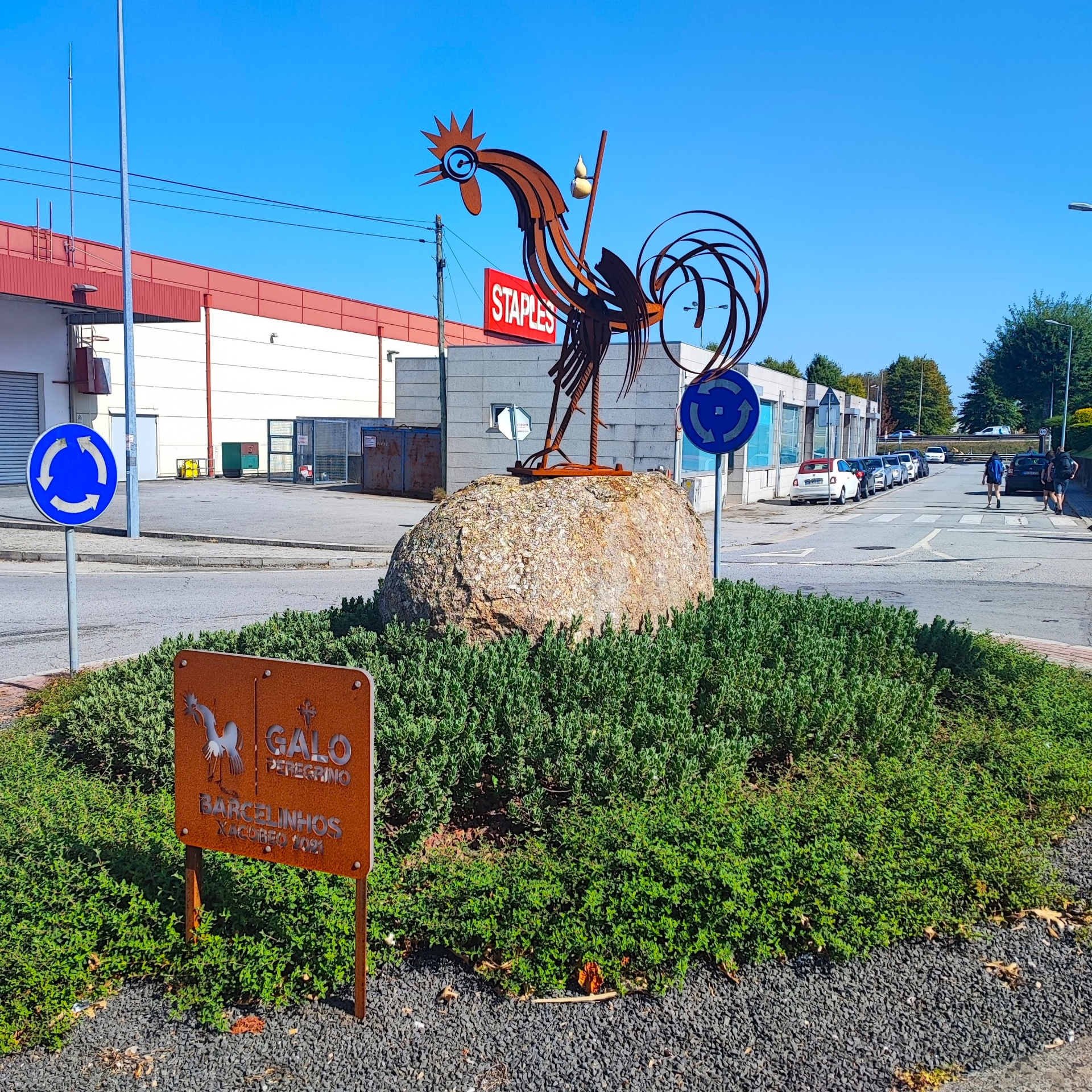 [14.80 km] – Underpass of the urban variant of the city of Barcelos

You are at 196 km to Santiago de Compostela.

Upon arrival in the city of Barcelos, before the bridge over the Cávado River, you will find the Chapel of Nossa Senhora da Ponte. This Chapel was established in 1328 and reformulated in the XVII century. It was, for several decades, a place of rest and overnight for pilgrims. Under the porch you can also see the stone benches and sinks (footwash) for pilgrims to rest. 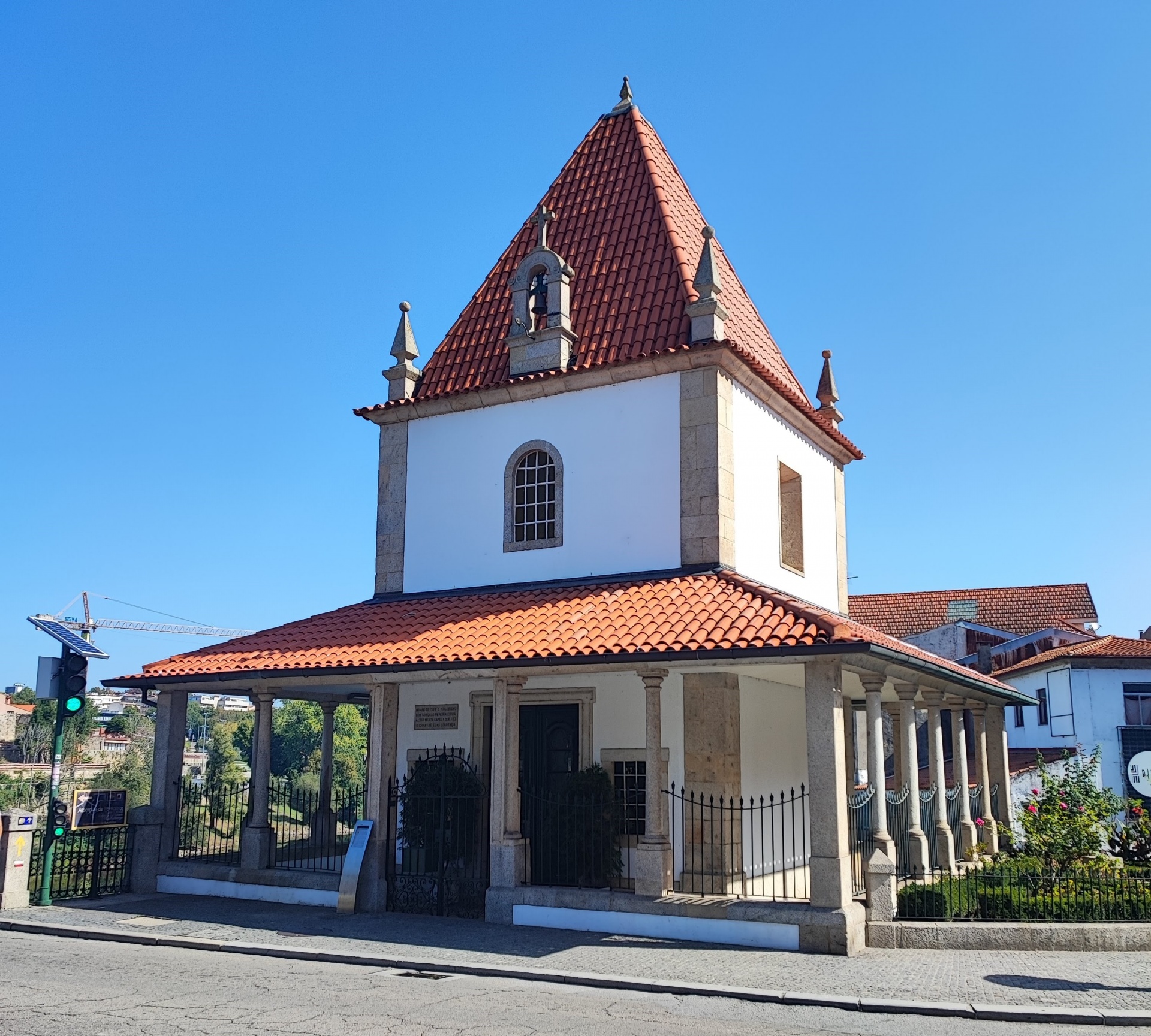 Arriving in Barcelos is reaching a Living Museum of the Caminho Português de Santiago. Barcelos is one (if not "the") most important city on the Caminho Português de Santiago in Portuguese territory. Barcelos is a place where paths converge, especially after the construction of the bridge over the Cávado River (Ponte Peregrinos de Santiago). Pilgrims, after passing through the Chapel of Nossa Senhora da Ponte, enter the city through the Ponte Peregrinos de Santiago and, after starting the ascent, reach the Palace (where the Cruzeiro do Galo is located) and the Igreja Matriz. Afterwards, they head to Largo do Município where the current Paços do Concelho (formerly Hospital de Peregrinos) is located.

Pass over the Cávado River enjoying the entire landscape, but always with caution due to car traffic on the Peregrinos de Santiago bridge. 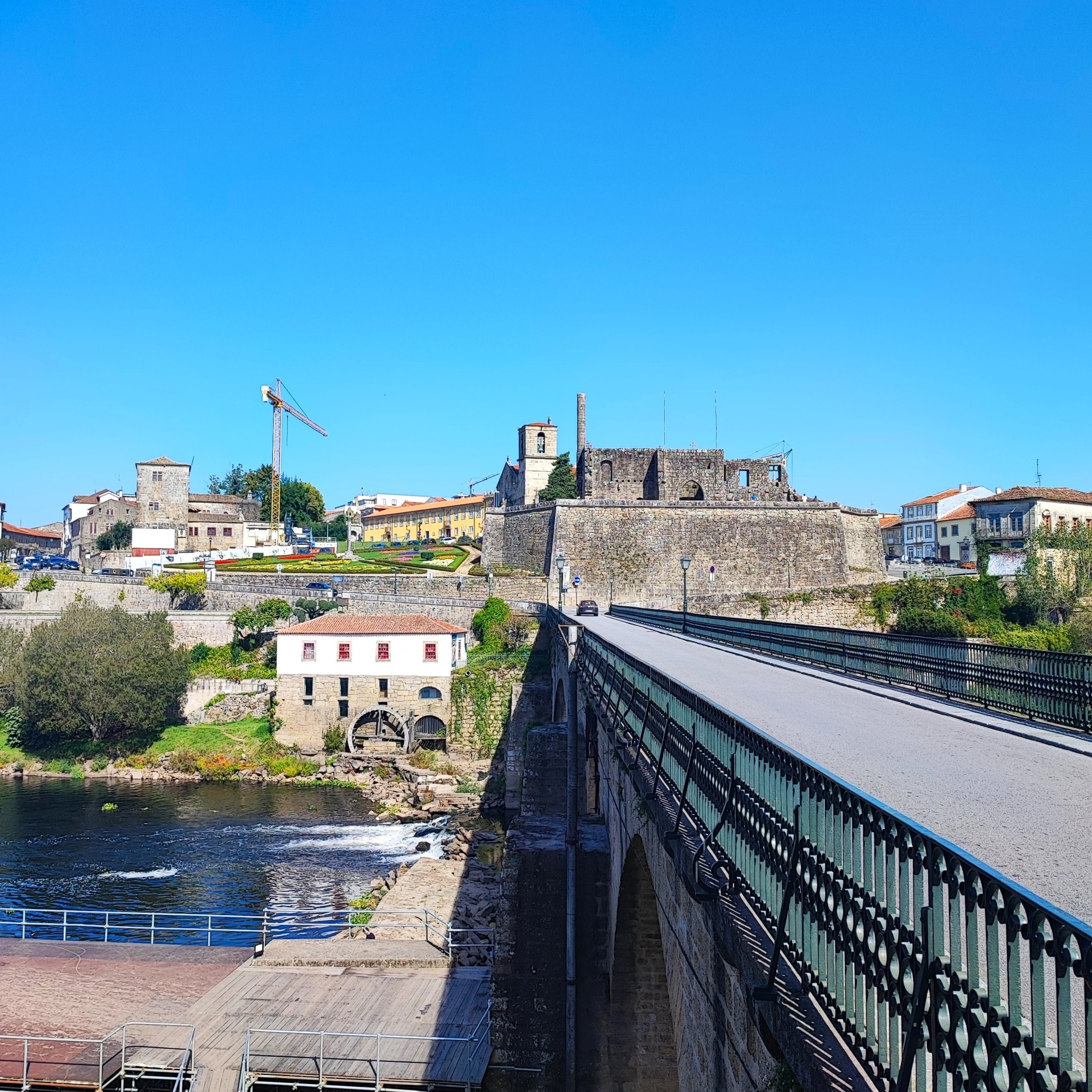 At the end of the bridge, turn left. You will pass near the access to Casa da Azenha and then turn right towards Igreja Matriz de Barcelos. At the end of the climb, on the right, you will find the Paço dos Duques and the Archaeological Museum where, among others, you can find the Cruzeiro do Galo (with the representation of the Legend of the Rooster of Barcelos). 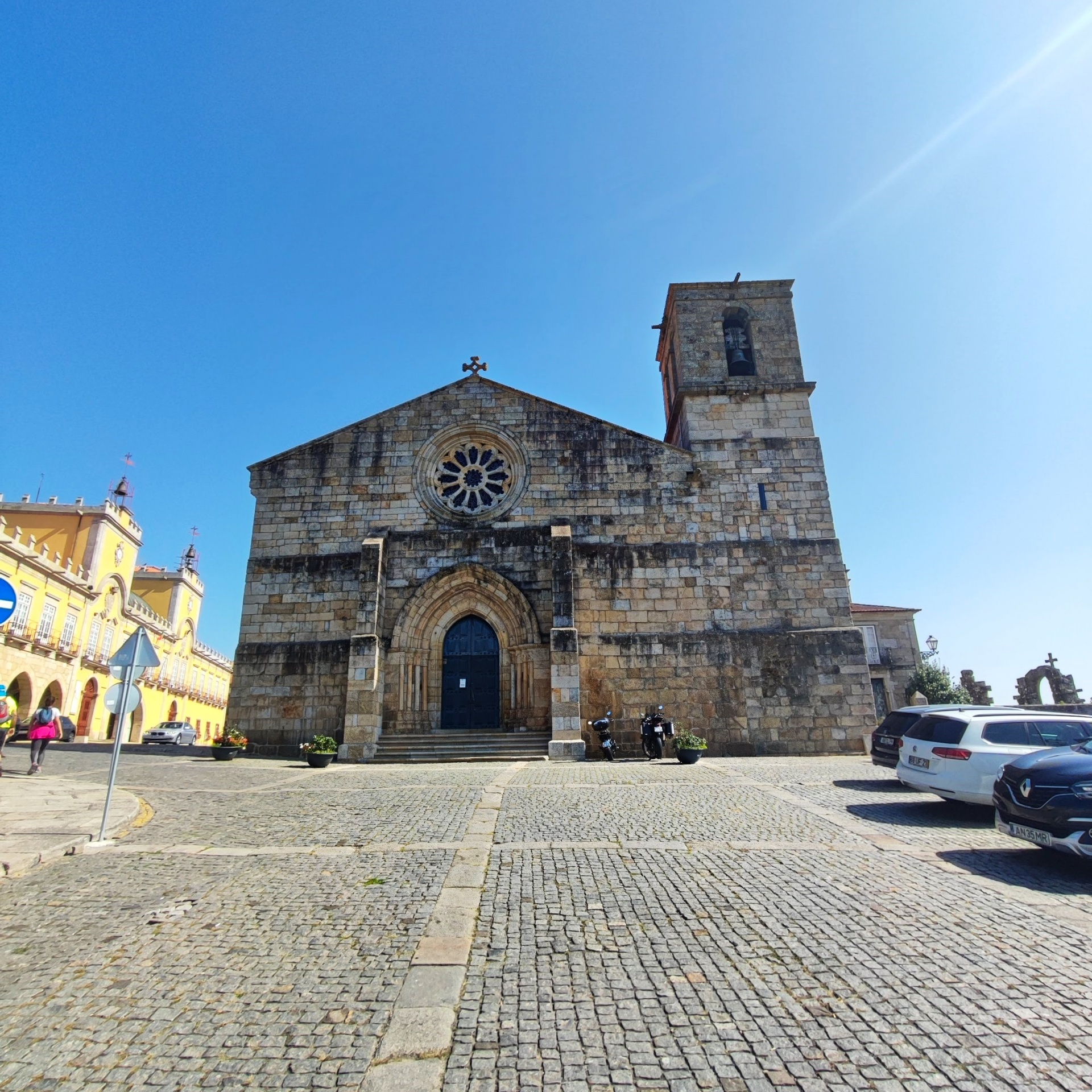 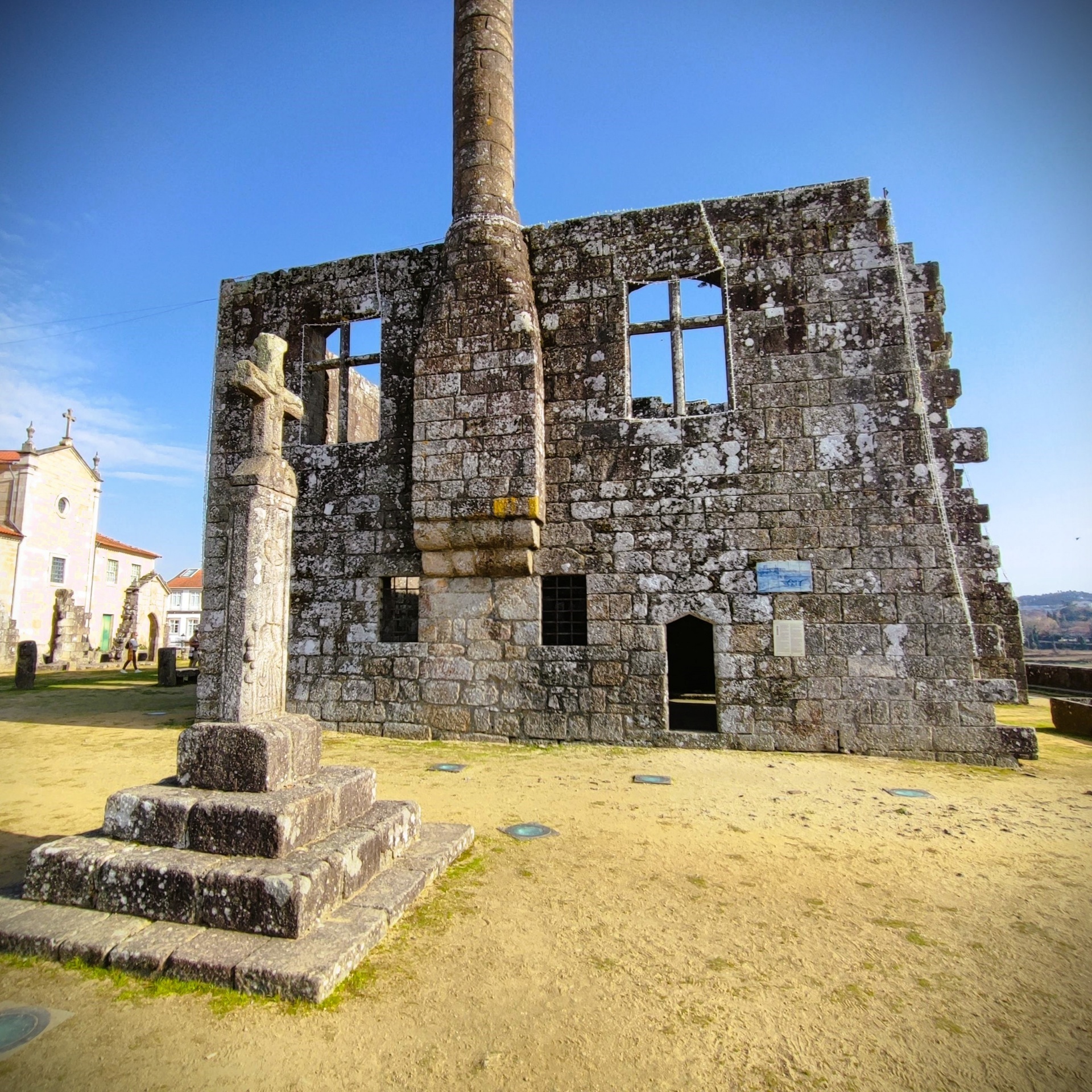 Between the Igreja Matriz de Barcelos and Largo do Apoio you can appreciate an extraordinary work by an artisan from Barcelos (Conceiçao Sapateiro: Cruz, Passion, Death and Resurrection of Christ) - even because Barcelos is a UNESCO Creative City - and an allusive tile panel to the Camino de Santiago, by Mário Rocha. You are at 195 km to Santiago de Compostela. 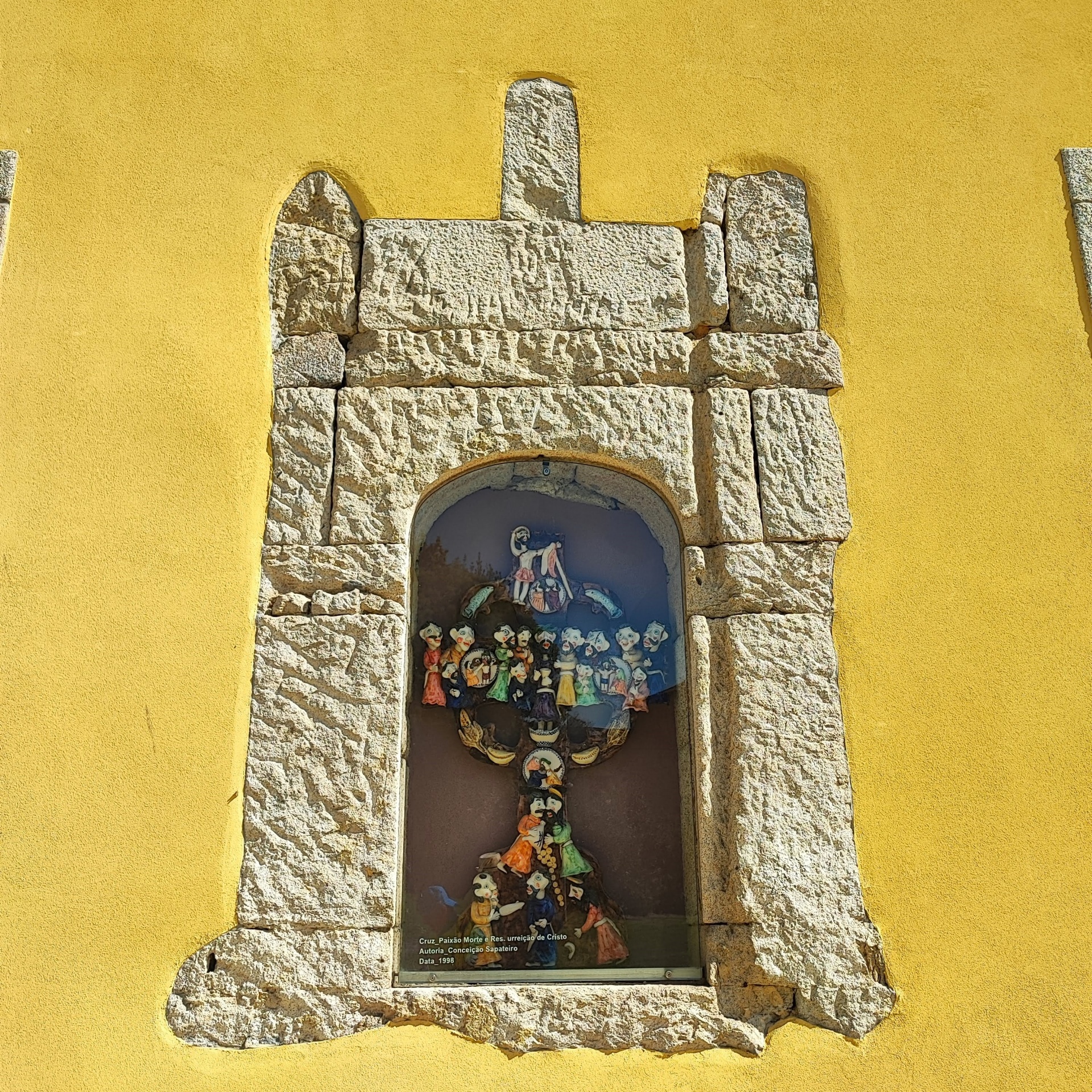 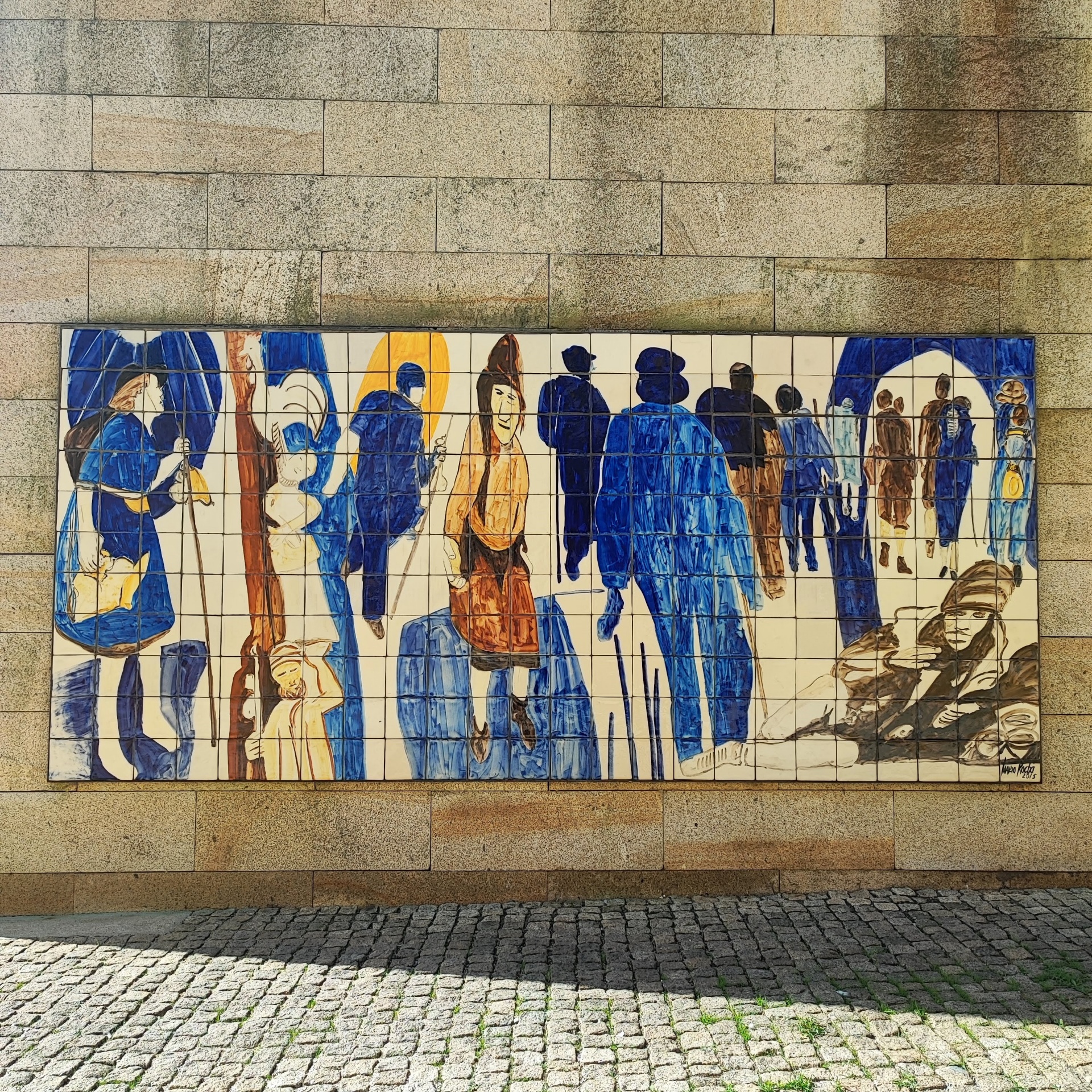 Arriving at Largo do Apoio, you have two options: either go straight ahead along Rua da Barreta, along the original route of the Caminho Português de Santiago in the city of Barcelos (shortest route to reach Albergue Cidade de Barcelos, 600 meters away); or turn right, following "Rua Direita" (Rua D. António Barroso), current itinerary of the Caminho Português de Santiago (after the Miracle of the Crosses, in 1504). 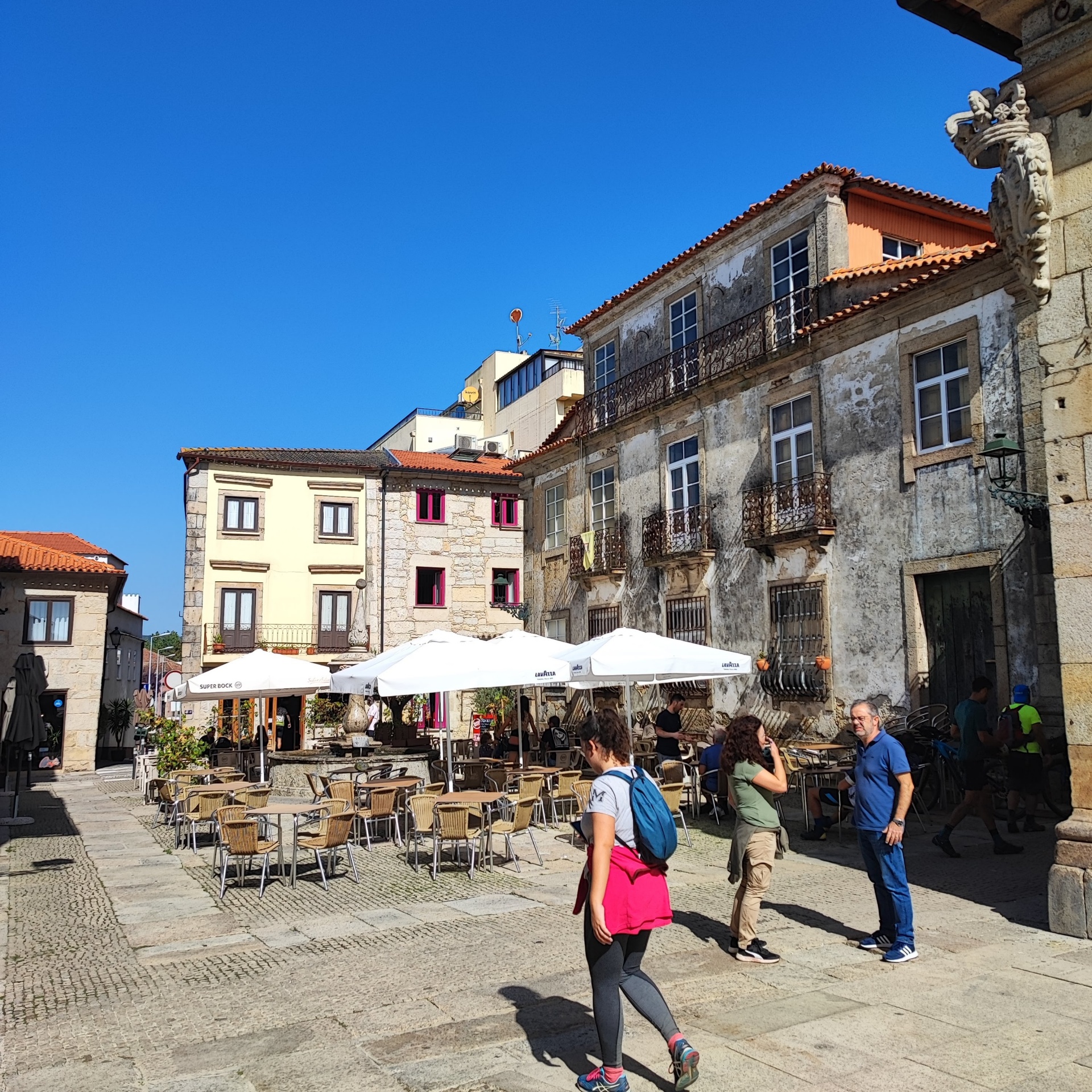 If you leave the route and turn right (off the Municipal Library), you will find the Barcelos Tourist Office. 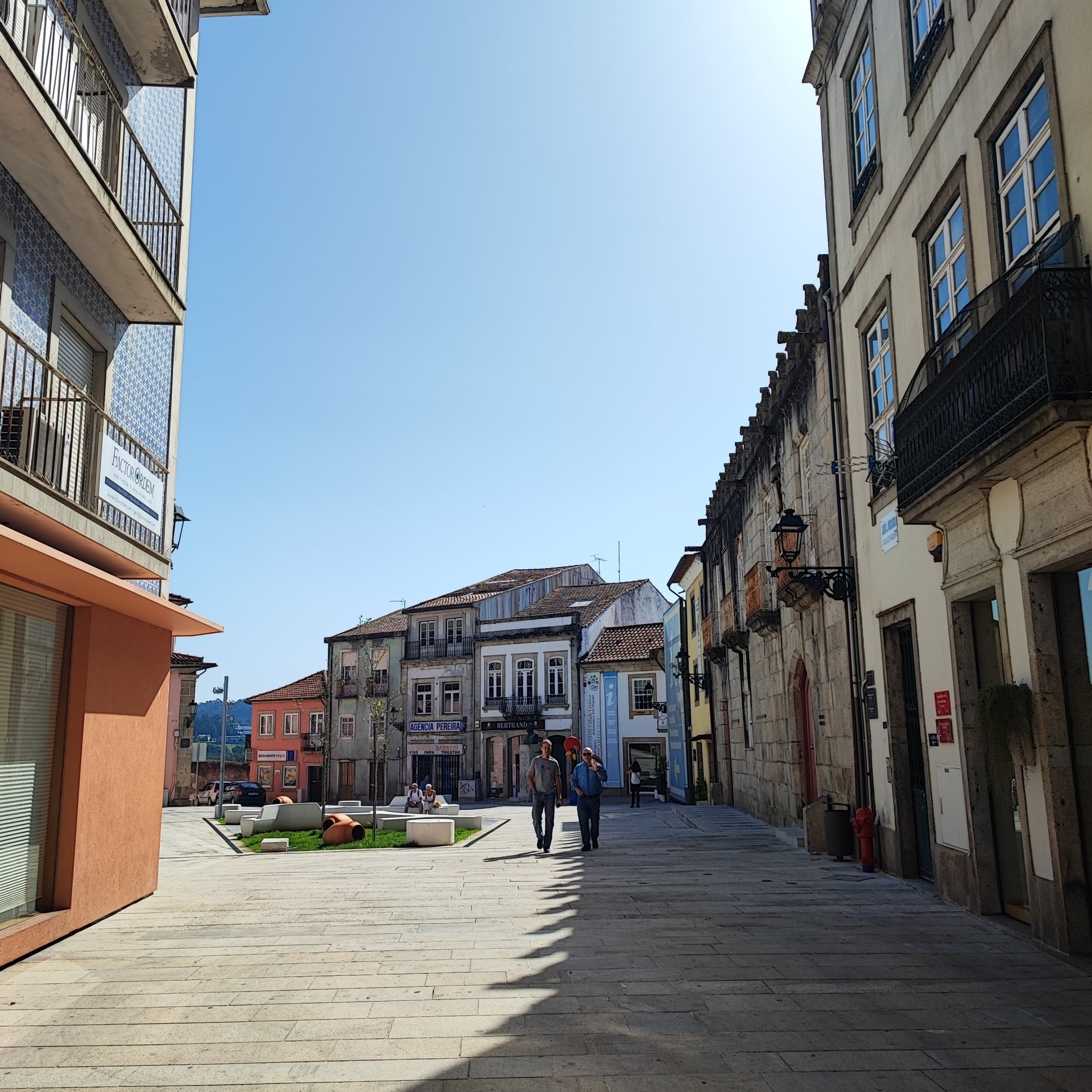 Barcelos and Pontevedra are twin cities ("sister" cities). In addition to the Caminho Português de Santiago, which unites them, the "Virgem Peregrina" is present in both cities, with a special preponderance in Pontevedra. Thus, you can visit the "Pilgrim" in the Temple of Senhor Bom Jesus da Cruz, in Barcelos and, later, in the Iglesia de la Virgen Peregrina, in Pontevedra. 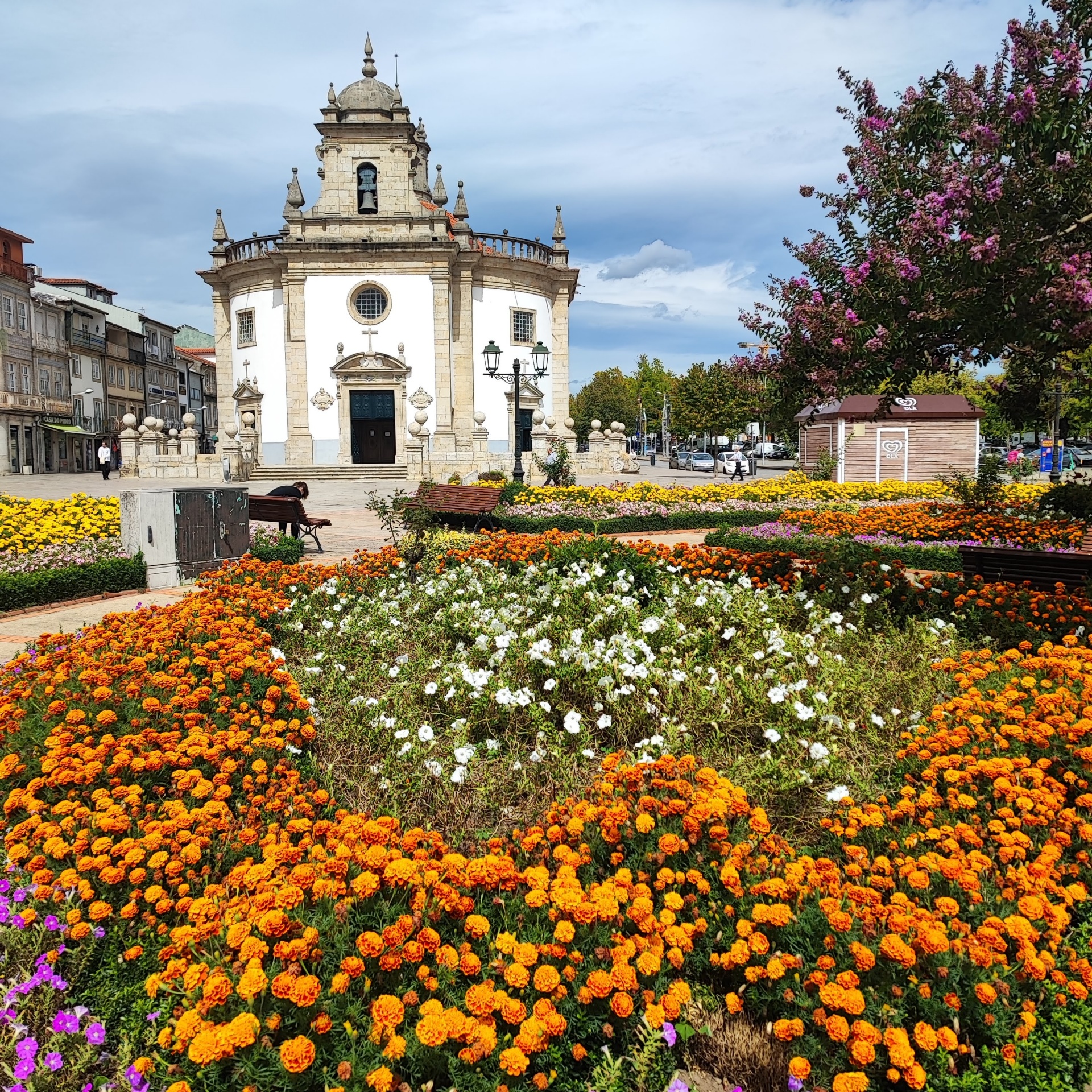 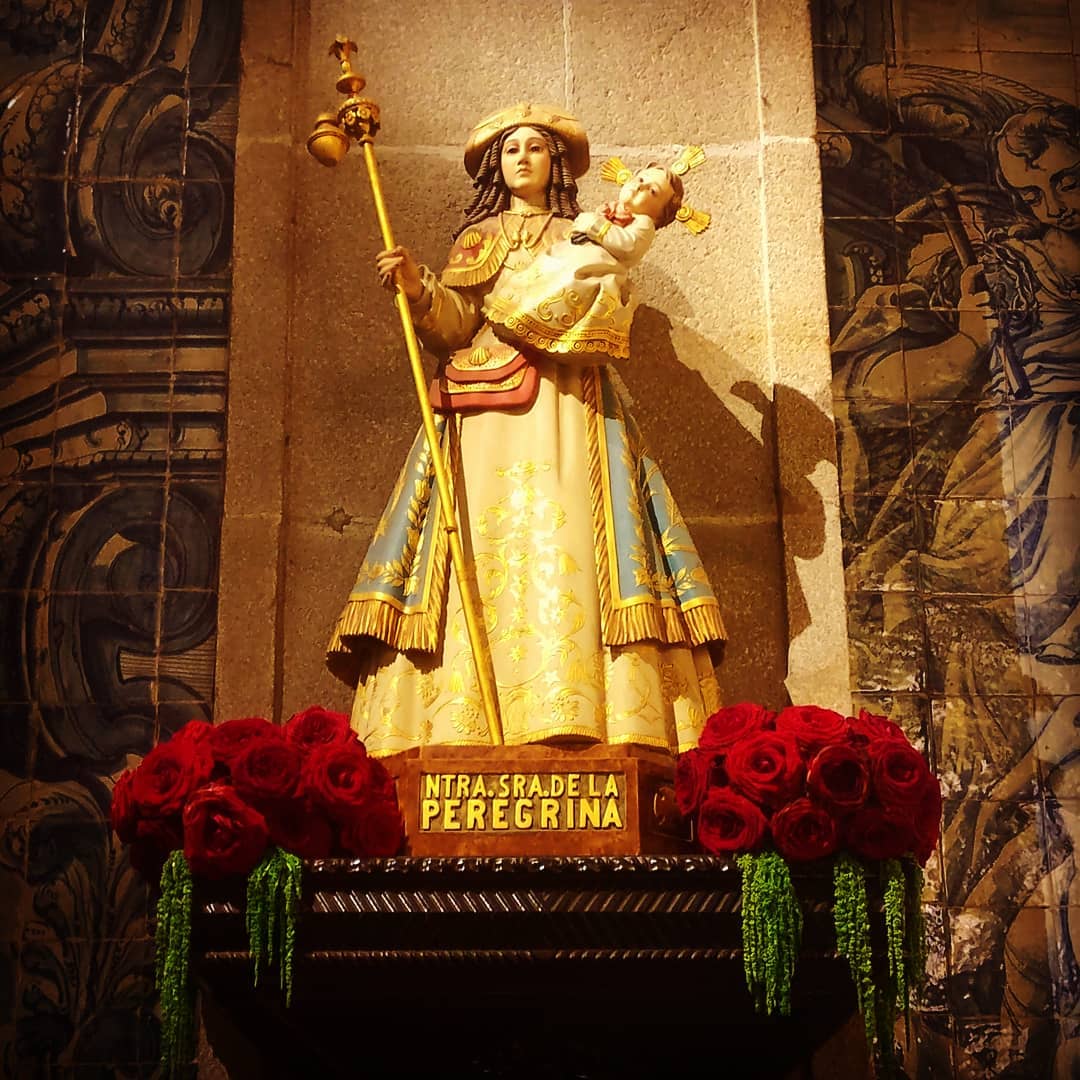 In the statue of the Volunteer Firefighter begins the Variant by Abade de Neiva of the Caminho Português de Santiago. Albergue Cidade de Barcelos is located near/beginning of this variant. So, if you want to go to Albergue Cidade de Barcelos, you should follow the signs on the left, near the Café / Restaurante Galiano. However, the route most traveled by pilgrims (main route) follows the signs further to the right, close to the BES bank.

Also here, upon arrival at fireman statue, is the reference that, if you turn right, along Av. dos Combatentes da Grande Guerra, you can head towards the Igreja de Santo António (Church of Santo António), where the Pilgrim's Blessing takes place (every day, at the end of the Eucharist at 19:00). 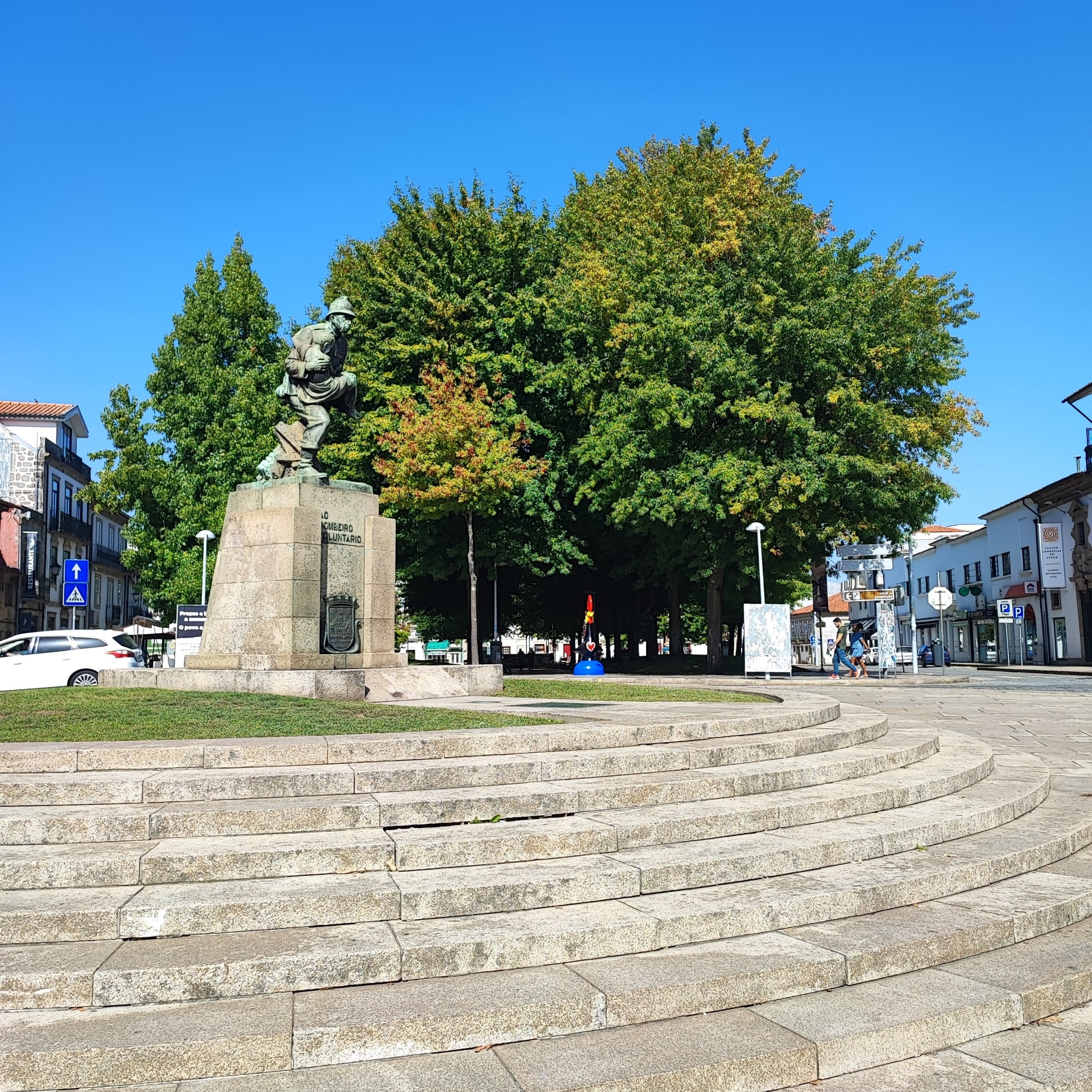 [17.10 km] – Exit on the left of the Abade de Neiva variant towards the Albergue Cidade de Barcelos

A few meters after the exit at Campo 5 de Outubro, turn left onto Rua Miguel Bombarda. Right at the beginning of the street you can find another one of the fantastic examples of the "Marvelous World of Figurado de Barcelos" - the "Minhota"! 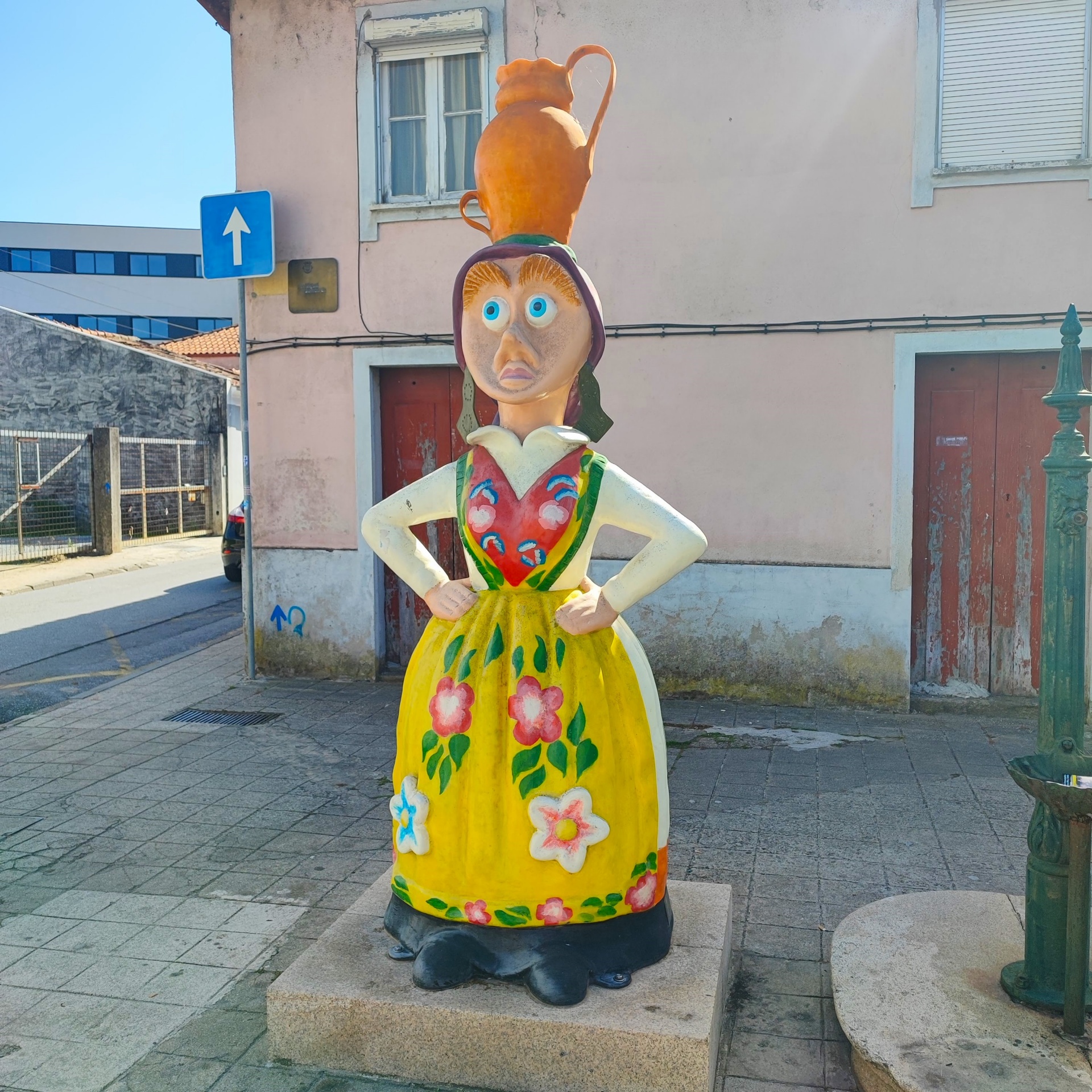 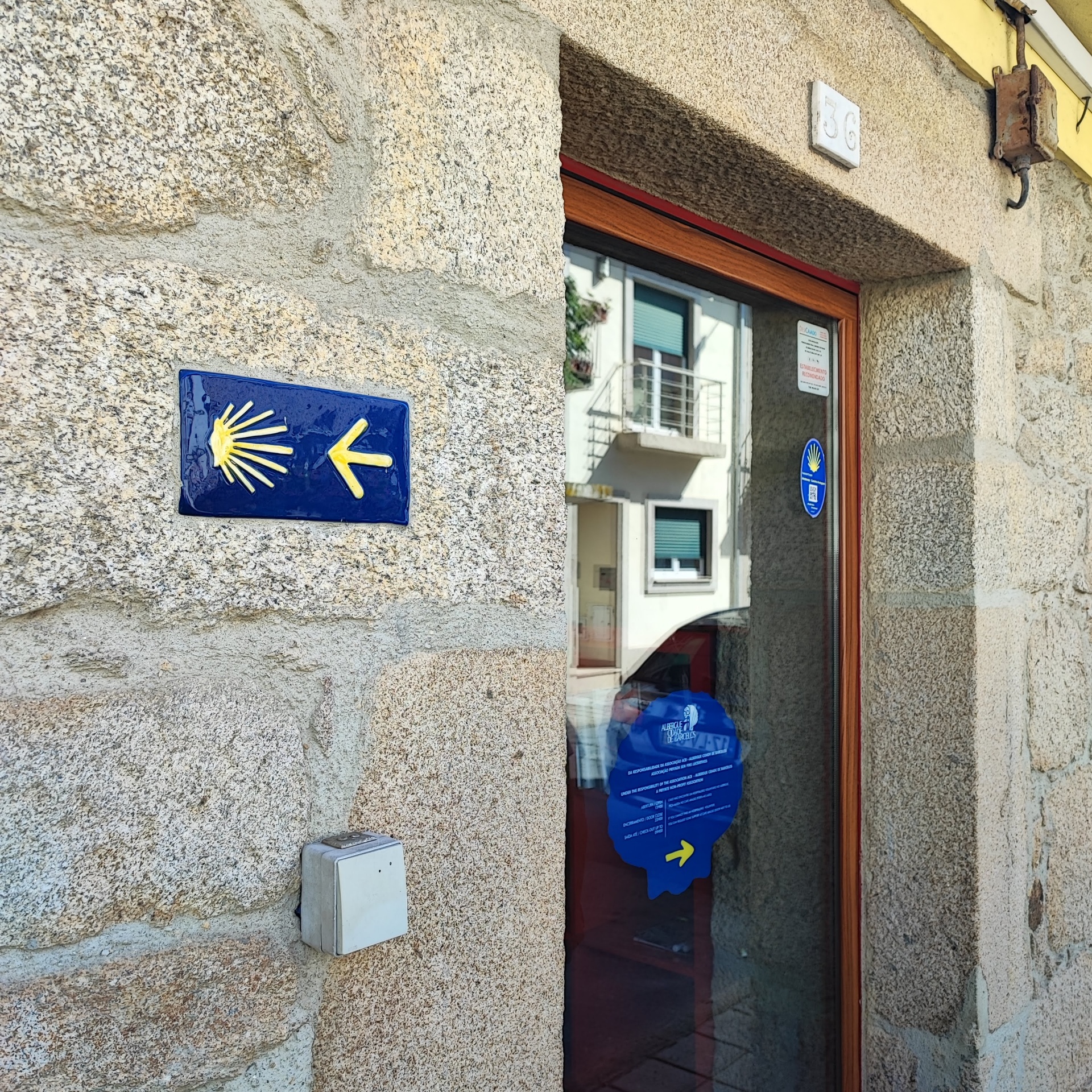 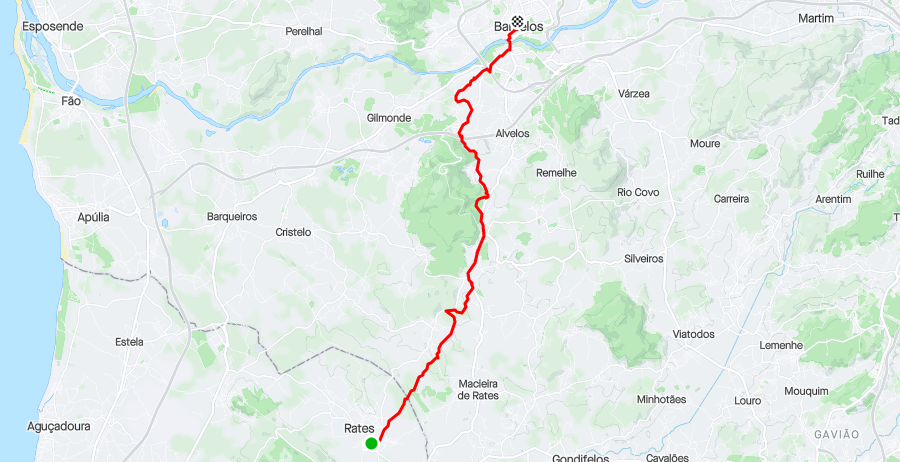